We are reading Elizabeth Gaskell’s North and South

, chapter 25, with many thanks to our reader, Barbara Edleman. Book talk begins at 19:20 minutes.

If the iTunes feed ever goes down, please head over to the Libsyn site.

Our June Giveaway is for Weaving Rag Rugs by Tom Knisley.
Follow this link to enter on our dedicated Raffle page. More on this book at the Mama O Knits Too Much blog.

And keep checking the raffle page for the list of books Nanette’s raffling off!
There’s quite a few in there you won’t want to miss! Appearances Yet To Come

Bleak House Bundles 1–4 are in the Shoppe. Each bundle is about 10 hours of audio. The fifth bundle is being compiled RIGHT NOW on the subscriber stream. It will take us until September 2014-or-so to finish the book… but you’ll have 40 hours (give or take) of listening between now and then.

Thought Provoking Video (the logic scene from Thank You for Smoking)—minus the visual, replaced by moving text… which is kind of nice:

The Art of Argument from Bryan Villagonzalo on Vimeo.

Return to the Top 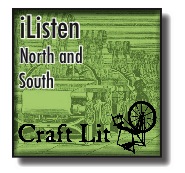 grab the code below \/

…and more in the Defarge/CraftLit shop!